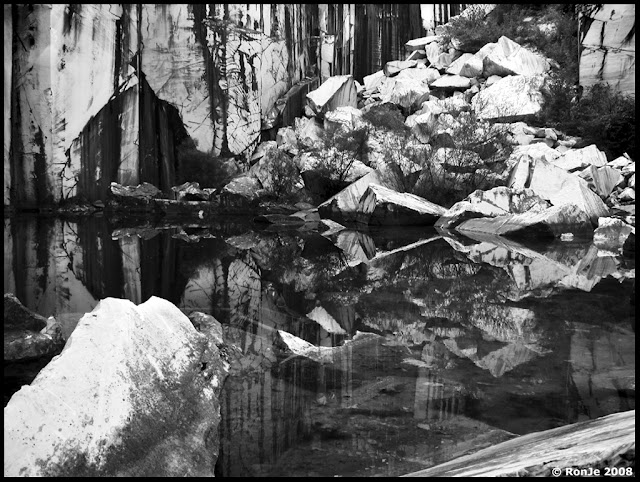 Cava delle Tagliate, ditta Henraux, Alpi Apuane.
‘Twas a nice stop. We were heading towards a two days hike and camp in Puntato, above Alpi Apuane, where every year in September many people meet to spend a weekend camping happily between the mountains.
The Tagliate quarry is on the way and represents a highly scenic location where a huge white marble block is cut vertically making a twenty foot tall and very narrow portal. then, the quarry is filled with angled stones sunk in the water, the most still water ever seen.
Geometry rules here, light is very low but – you guessed it – enough to shoot nice pictures at least until the hour is too late. You have a difficult task in composing a frame, and that’s the hardest task among many: light, as said, stability, reaching a spot, focusing, catching reflections and transparency at the same time.
This shot seems, partly, the result of a double exposure though it isn’t. Single shot, single frame.
Gotta go back there, by Vespa, better (did you take a look at my Vespa weblog?), and bring my medium format camera and a tripod.

Copyright 2008 by Alessandro “RonJe” Melillo Camera: Nikon 5700 Film: digital 100 ISO equiv Focal Length: 35mm (in 35mm equiv) Aperture: f/2.8 Exp. time: 1/250 Filter: CPL Location: Alpi Apuane – Cava delle Tagliate Soundtrack: silence. everything is still there. occasional bikes passing by. Other: I had to be there to shoot, not shoot because I found myself there…