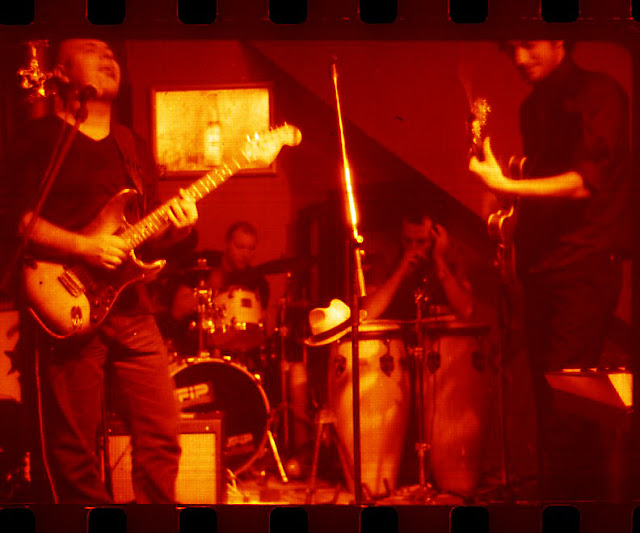 Ok, this is some live gig shooting, and I did it partly with my 5700 and partly with my Zorki 4 and a roll of FP4 with a few frames left inside it. It had already been partly exposed and I couldn’t push it anyway, so I just needed a firm grip and steady hands. You can’t just delete and re-shoot if you got just a dozen frames and no additional roll…
The orange dye is due to the fact I scanned the neg with my flatbed scanner and it’s not capable of scanning negatives, so I just left the cover open, put a piece of milky white plexiglas and turned the light on. It’s a warm light, so the scanner records an orange light. I like it, however, and I decided to leave it, hope you like it too.
Gonna post some other shots, done with the 5700, so to be able and make a comparison. I just looked at the previews in the camera’s lcd and some o’them look nice.
Skiginator rule, folks! Go listen them, go buy their records, go ask for their autographed panties!
Geez, you can’t photograph the sweet sound of a distorted tube amp, you gotta HEAR that.
Copyright 2008 by Alessandro “RonJe” Melillo